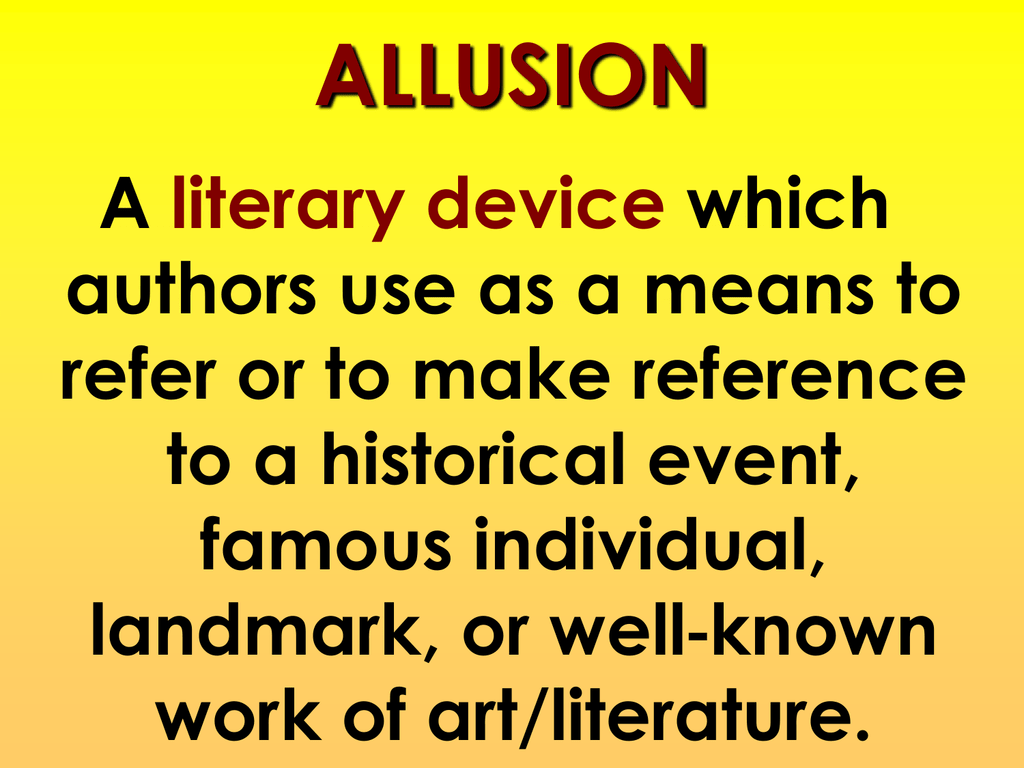 Allusion Examples in Shakespeare and Other Literature

Note: You can basically find allusion on every page of Shakespeare. I dare you. Open up a Shakespeare book, point to a random page, and see if you can find the allusion.

Gallop apace, you fiery-footed steeds,
Toward Phoebus’ lodging. Such a wagoner
As Phaeton would whip you to the west
And bring in cloudy night immediately. – Romeo and Juliet

I’m full strength like a Cyclops‘s eye drops,
I got support like high-tops.
– Ugly Duckling, Left Behind.
“The side lines is lined with casualties
Who sip the life casually, then gradually become worse
Don’t bite the apple, Eve” -Jay-Z
“Now who’s the boss? Not Tony Danza.” -Malik B of the Roots
“Coming from the deep black like the Loch Ness,
now bring apocalypse like the Heart of Darkness.” – Talib Kweli
“My rep grows like the nose of Pinocchio,
Just because I’ve mastered the art of braggadocio.” -Akrobatik
“This is the point of no return and nobody can stop it
Malcolm Little when he knelt before Elijah Muhammad
The comet that killed the dinosaurs, changing the earth” –Immortal Technique
“Tonedeff’s slays giants,
as if my legal name’s David.” -Tonedeff
“But now we’re facing more poverty,
It’s the most we’ve seen since 1993.
We need to turn this thing around: Michael Vick,
But a recession could be headed for a double dip.”
List an allusion you have read and cite using MLA format. Then give an explanation. First come first serve (you cannot copy anyone else's)

After reading the advice on academic writing please discuss how you would complete the following.

Which of the two alternatives in bold do you think is more appropriate in academic writing?

1 The government has made considerable/great progress in solving the problem.
2 We got/obtained excellent results in the experiment.
3 The results of lots of/numerous tests have been pretty good/encouraging.
4 A loss of jobs is one of the consequences/things that will happen if the process is
automated.
5 The relationship between the management and workers is extremely/really important.
6 Some suggestions springing up from/arising from the study will be presented.

Use a more formal word or phrase to replace those in bold.

Suggest alternatives to the following to avoid use of personal language.

1 In this essay I will discuss the main differences between the English and
Scottish legal systems.
2 I have divided my report into five sections.
3 I will conclude by proposing that all drugs should be legalized.
4 The opinion of the present author in this essay is that the importance of
the monarchy should be reduced.
5 In the third part of the essay, we will look at the reasons for public
hysteria over the SARS virus
6 Although I am not an expert in the field, I have tried very hard to
understand the main ideas.
at February 21, 2020 2 comments:

Identifying your errors. Now that we are into the second semester and you are ready to get down to business; read over the tips in this link and discuss what your "AH HA" moment is regarding your own writing.
How to identify error s in your writing.
Your errors
at February 06, 2020 12 comments:

Allusions: review the attached Google slide presentation. After viewing, comment on allusions you have read in any one of your readings (novel or short story). And create one of your own. See the posted image.
Allusions
at February 06, 2020 11 comments:

I heard you. What books are happy books? Discuss what books might be good to put on the District reading list. Remember they must be appropriate for all students and have a message to teach. Consider the literary terms and how they might fit. For example Winnie the Pooh might be a character analysis, theme, and setting.

Because this is the first week of the semester you are in charge of the discussion. What does this mean? You are able to discuss a topic in Language Arts that you feel is important for your fellow scholars to read and respond to. I can not wait to see what you have to say.  Also please remember to copy your posts and turn in to your teacher for credit. Let's do this.